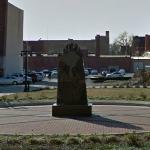 It recognizes the efforts of an extraordinary group of soldiers who fought and died in defense of emancipation and so that we as Americans may live. The monument stands more than 10 feet tall and is believed to be only the second monument in the United States honoring African-American soldiers who fought in the Civil War.
Links: picturedecatur.blogspot.com, herald-review.com
646 views