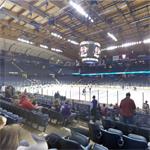 In 1999, the insurance giant Allstate bought the naming rights to the building formerly known as the Rosemont Horizon since it opened in 1980. It is home to DePaul Blue Demons college basketball, Chicago Wolves hockey, and Chicago Sky WNBA basketball. It is one of the busiest entertainment arenas in the region with many big concerts and shows on its calendar.

The most unique feature of the building is its wood roof. While under construction in 1979, the roof collapsed, killing five workers and injuring 16 others.