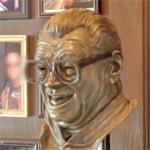 This sculpture is on display at the entrance of one of the steakhouse restaurants that bear his name in the Chicago area.

On the opposite wall from the statue is a small display case containing a pair of Caray's trademark eyeglasses.
Links: en.wikipedia.org
563 views