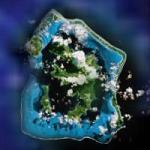 The island was settled by Polynesian people about the 4th century. While the island was sighted by earlier explorers, James Cook led the first group of Europeans to visit the island in 1777.

In 1842 Bora Bora was made a protectorate of France.

During World War II, following the December 7, 1941 attack on Pearl Harbor by Japan, Bora Bora was chosen as a South Pacific Military supply base by the United States, and an oil depot, airstrip, seaplane base, and defensive fortifications were constructed. However, the island saw no combat as the American presence on Bora Bora went uncontested over the course of the war. Although the base was officially closed on June 2, 1946, so many American personnel loved the island and the people that they refused to leave. Some had to be forcibly removed following complaints from their families.

The development of the airstrip in World War II meant that Bora Bora remained French Polynesia's only international airport until Faa'a International Airport was opened in Papeete, Tahiti in 1962. The airstrip at Bora Bora was never able to accommodate large-sized aircraft.

Today the island is mainly dependent on tourism. It has many high-end resorts, mostly visited by American and Japanese tourists. Many tourists come to Bora Bora for a beach holiday, and are surprised to learn it is a lagoon destination, with relatively few, narrow beaches.

Air Tahiti has five or six flights daily to the island from Papeete, at a cost of about 14,000 XPF one-way.

Although French is the official language of French Polynesia, English is becoming more widely spoken, especially among the younger generation.

Public transport on the island is fairly limited, consisting of a single bus that goes halfway around the island and back every hour or so. Bicycles are the recommended method of transport for tourists, if your hotel will not arrange your transport for you. There are also small electric cars for hire in Vaitape.