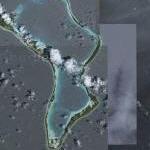 The atoll was "officially" discovered by the Portuguese in the 1512, though earlier Arabs and Chinese explorers may have visited it in the past. Diego Garcia is the largest of the 52 islands in the Chagos Archipelago.

The name of the island is said to be either from the Portuguese ship's captain or navigator.

The island was uninhabited until the 18th century, when the French started to settle a few inhabitants. It became a colony of the British in 1814 under the Treaty of Paris, and was administered from Mauritius until 1965.

In 1965, it was purchased by the UK to be permitted to the US to use as an air and sea base under a joint defense strategy. In 1971, construction of the US Naval Communications station and airfield began.