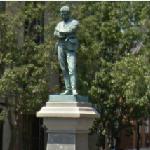 By Mike1989 @ 2013-04-10 10:18:56
@ 38.80375, -77.04718
Alexandria, Virginia (VA), US
Appomattox is the name of a bronze statue that is positioned in the center of the intersection of South Washington Street (Virginia Route 400) and Prince Street in Old Town, Alexandria, Virginia, in the United States. It was created by sculptor M. Caspar Buberl and commissioned and erected by the Robert E. Lee camp of the United Confederate Veterans in 1889. The form of the soldier was designed by John Adams Elder, who modeled it after a painting of the same title that shows a lone Confederate viewing the aftermath of the battle of Appomattox Court House, where Gen. Robert E. Lee ultimately surrendered to Union general Ulysses S. Grant.

The dedication ceremony was held on May 24, 1889, and was attended by a vast crowd. It was noted that by noon of that day, a great influx of visitors had swarmed the town of Alexandria to take part in the ceremony, which was overseen by Fitzhugh Lee, who was governor of Virginia at that time. Joseph E. Johnston, former Confederate general of the Army of Tennessee, was also in attendance. The UCV foresaw the controversy that would potentially arise over the monument. Thus, they motioned in the same year to have it protected by state law. This legal protection continues as of 2010.
Links: en.wikipedia.org
515 views