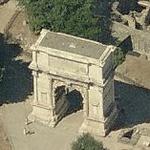 The Arch of Titus has provided the general model for many of the triumphal arches erected since the 16th century—perhaps most famously it is the inspiration for the 1806 Arc de Triomphe in Paris, France.
Links: en.wikipedia.org
1,144 views