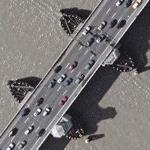 The Arland D. Williams Jr. Memorial Bridge is located on the Potomac River between Arlington, Virginia and Washington, DC. Interstate 395 and U.S. Highway 1 cross on the 3 spans of the 14th Street Bridge Complex. The easternmost span was originally named the Rochambeau Bridge when it was built in 1950.

In 1983, following a 1982 airplane crash which struck it, the Rochambeau Bridge was renamed to honor Arland D. Williams Jr., who was a heroic victim of the disaster.
Links: en.wikipedia.org
2,071 views