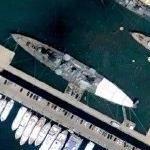 By kjfitz @ 2005-08-24 18:35:41
@ 37.933769, 23.683761
Athens, Greece (GR)
Georgios Averoff is the world's only surviving heavily armored cruiser of the early 20th century. During the Balkan Wars in 1912 and 1913, she gained her greatest glory as the Hellenic Navy fleet flagship by freeing the North and Central Aegean islands, as well as the coastal cities of East Macedonia and Thrace. In 1917, she entered World War I and served on the side of the Entente. She participated in the Asia Minor Campaign (1919-1922), carrying Greek troops to and from Smyrna. She served on the Allied side during World War II, having fled to Egypt with the rest of the fleet. She led the Greek naval force when the fleet dropped anchor in the Faliron Bay, Athens on October 17, 1944, at the end of the Nazi occupation. Averoff's last voyage was to Rhodes in May 1945, to commemorate the accession of Dodecanese from Italy. She was towed to her permanent berth in Faliron Bay in 1985, where is now open as a museum.
Links: www.hnsa.org
1,495 views

GusHAF
@ 2005-09-24 04:48:09
Forgive me for this lack of historical dates (the below story was tought to us during school) but this ship also helped at the determination of the east coastline borders between Turkey and Greece. They determined these borders with a simple way. The ship fired with its cannons and at the point the cannonball landed and to the west was Greek territory. From that point and East was Turkey's territory. Forgive me if this is not true. A teacher told us this at school and i still remember it as it was impressive to my personal taste :)