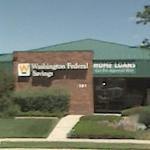 On Aug. 12, Todd Waller Markham allegedly walked into Washington Federal Savings at 181 E. 6100 South and gave the teller a note demanding cash. He was given the money and he left the bank, according to charging documents filed in United States District Court for Utah.

However, the reverse side of the note Markham allegedly gave the teller was a form detailing the results of a drug screening for Markham. The form identified Markham by name, Social Security number and birth date. Police were able to cross-reference the photo on Markham's driver's license against surveillance video and waited at his apartment.
Links: www.deseret.com
1,004 views