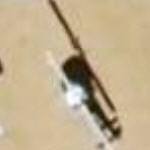 Used by more air forces and built in greater numbers -than any military aircraft since World War II, the Huey family of helicopters, grew from one single prototype, the XH-40. The UH-1 was the Army's first production line turbine powered helicopter. Over thirty years the aircraft gross weight has been tripled. Even the AH-1 Cobra attack helicopter is based on the original Huey. Originally designated HU-1, this earned the nickname Huey with the seldom used official nickname the Iroquois. UH-1's were the backbone of Air Assault forces during the Vietnam War. Huey's were modified into gunships, emergency evacuation and command post versions. UH-l's are flown in navies around the world as antisubmarine aircraft. The UH-1 has served everywhere from the Arctic to the deserts and in 1960 set six world rotary wing records under adverse Texas summer conditions. Although some are over thirty years old, UH-1's still are active in foreign countries.

At present (January 2001), all UH-1F, TH-1F, and UH-1P Huey helicopters have since been retired from full active military service from the United States Air Force. To this day, there are still some UT-1F Huey's that are owned and operated by some small business's here in the U.S., but more so in the Mid-West and along the Eastern Sea board. There were about roughly about 10,000 Huey helicopters built by Bell Helicopter Textron in Fort Worth, Texas, and many different types as well were made just for the U.S. (A,B,C,D,E,F,G,H,J,M,N,&P). There were a little over 5,000 Huey's lost during the War in Vietnam, Laos, and in Cambodia. Today, the U.S. military is phasing out its Huey helicopter fleet from full military service and is now going with the UH-60 Black Hawk and SH-60 Sea Hawk.

The huey was always a work horse for the troops on the ground in a time of war, it served as a utility truck, an ambulance, a gunship and a troop transport and also helped in saving lives in a time of desperate need it ranks up there with the B-52 Stratofortress, the KC135 Stratotanker, the C-130 Hercules and the F-4 Phantom, it proudly served over 30 years of service and the crews whom did serve with these birds did so with-out complaint. Today the Vietnam Helicopter Crew Members Association is still keeping the huey helicopter (as well as other types) in the spot light due to its popularity.

On display is the UH-1F model "Huey. The "F" model was designed specifically for the United States Air Force. Its primary mission was to supply and support our intercontinental ballistic missile sites. Equipped with the more powerful General Electric T 58-GE-3 turbo-shaft engine, the "Hueys' could carry ten passengers plus a pilot. In addition to missile site support, the "F" model was used as a personnel transport and rescue helicopter. Some UH-1F's were assigned to the 20th Special Operations and 21st Special Operations Squadrons. This aircraft is on loan from the USAF.

According to the Air Force Historical Research Agency (AFHRA/RSA), Maxwell AFB, AL, the museum's UH-1F has the following history:

UH-1F Huey Helicopter s/n 63-13143 (Model 204) was manufactured by Bell Helicopter (Textron) in Fort Worth, Texas and delivered to the United States Air Force on 24 July 1964. Its assignments were:

Oct 1965 - To Air Force Flight Test Center (AF Systems Command), Edwards, AFB, California. (Converted to a JUH-1F Huey). It was assigned to the X-15 Research Flight Test Program in the capacity of search, rescue and support. It supported X-15 s/n 56-6672.