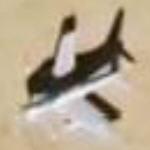 By kjfitz @ 2007-03-15 22:24:39
@ 33.884093, -117.266715
Riverside, California (CA), US
Produced in greater quantities than any other aircraft since the end of World War II, the F86 Sabre was the pride of the US Air Force during the Korean War, and the front line interceptor in most NATO and SEATO countries during the 1950’s. The Sabre was the swept wing version of the Navy’s FJ-1 Fury. The Sabre was the first aircraft to employ radar in head on targeting, carry all rocket armament, carry one pilot for flying and radar control, and have electronic engine fuel control. The Sabre jet was very popular with pilots of all countries and quickly gained a reputation in the skies over Korea. Sabres shot down 814 enemy aircraft during the Korean War with a loss of only 58 Sabre jets. This aircraft is on loan from the USAF.

According to the Air Force Historical Research Agency (AFHRA/RSA), Maxwell AFB, AL, the museum’s F-86H has the following history:

Jun 1970 - Dropped from inventory by donation to school or museum
Links: marchairmuseum.com
640 views