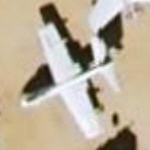 By kjfitz @ 2007-03-15 22:46:05
@ 33.884378, -117.266559
Riverside, California (CA), US
The A-9 was designed by Northrop as a competitor for the ground attack aircraft competition for the Air Force in the mid 1970’s. It was designed to provide extremely stable platform for bombing accuracy. It was also designed to be extremely durable and rugged since most of its flight time was to be spent close to the ground, in range of enemy guns. The twelve underwing pylons could carry almost all arms in Air Force inventory. All flight control systems were backed up by identical systems and all vital areas were protected with aluminum alloy armor of 1.25 to 2.5 inches. The competitor in the competition, and the aircraft chosen for production, was the A-10 Warthog, which gained fame in the Persian Gulf War as a tank killer. The A-9 was a very capable aircraft and it is curious that the Russian Su-25 Frogfoot ground attack aircraft looks very similar??

The two A-9A prototypes built had serial numbers 71-1367 and 71-1368. Both were designed and built for the AX Fly-Off Competition with the Fairchild Republic YA-10A “Thunderbolt II” (the two YA-10A prototype aircraft built were serial numbers 71-1369 & 71-1370), at the Air Force Flight Test Center at Edwards AFB, California. The first actual flight of the A-9A was on May 30th 1972, but the fly-off competition started on October 10th and concluded on December 9th, 1972. The AX Fly-Off was intended to identify the differences between the two aircraft in performance. The two aircraft were equally accurate in weapons delivery and in the gun tests. The gun that was supposed to be used for the fly-off was the General Electric GAU-8 “Avenger” 30mm cannon, but it was not ready in time to be used/tested for the fly-off. So a 20mm “Vulcan” cannon was used for the actual testing in both of the aircraft. A-9As 1367 & 1368 completed 123 flights, totaling 146.0 flight hours between the both of them. The two prototype YA-10As completed 87 flights totaling 138.5 flight hours. The YA-10A was selected the winner of the AX Fly-Off. After the fly-off was completed, the U. S. Air Force had no more use or interest in either of the two A-9As; they were transferred over to the NASA Dryden Research Center for flight testing before being completely retired from service.

Only two YA-9A’s exist today. Our YA-9A and a second one at the Castle Air Museum in Atwater, CA. The March Field Museum received this YA-9A in 1981 from the NASA Flight Research Center, Edwards Air Force Base, Ca. This aircraft is on loan from the USAF.
Links: marchairmuseum.com
1,121 views