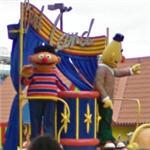 By kjfitz @ 2010-01-22 09:07:24
@ 40.184129, -74.871872
Middletown, Pennsylvania (PA), US
Bert and Ernie are two roommates on the long-running television show Sesame Street. The two appear together in numerous skits, forming a comic duo that is one of the centerpieces of the program. Originated by Frank Oz and Jim Henson, the characters are currently performed by Muppeteers Eric Jacobson and Steve Whitmire, with Oz performing Bert occasionally since 2000.

Bert and Ernie were built by Don Sahlin from a simple design scribbled by Muppets creator Jim Henson. According to Frank Oz, Sahlin also defined their characters on the basis of their physical appearance: Ernie was an orange and Bert was a banana.[citation needed] In a classic pairing, Ernie appears chubby while Bert appears quite skinny (in a similar way to Abbott and Costello or Laurel and Hardy).

According to A&E's Biography, Ernie and Bert were virtually the only Muppets to appear in the Sesame Street pilot episode, which was screen tested to a number of families in July 1969. Their brief appearance was the only part of the pilot that tested well, so it was decided that not only should Muppet characters be the "stars" of the show, but would also interact with the human characters, something that was not done in the pilot.
Links: en.wikipedia.org
1,000 views