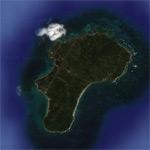 The Corn Islands, along with the eastern half of present-day Nicaragua, was a British protectorate from 1655 until 1894, a period when the region was called the Mosquito Coast. At one time, the islands were frequented by Caribbean pirates. In 1894, the Nicaraguan government claimed the area.

Under the Bryan–Chamorro Treaty of 1914, the islands were leased to the United States for a period of 99 years. The terms of the lease made the Corn Islands subject to U.S. law, but they remained Nicaraguan territory. The lease notwithstanding, the United States never maintained a significant presence in the islands.
Links: en.wikipedia.org
1,589 views