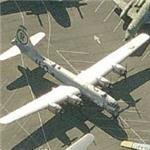 By kjfitz @ 2010-05-23 20:35:50
@ 38.26960409, -121.93030219
Travis AFB, California (CA), US
The Boeing B-29 Superfortress was a four-engine propeller-driven heavy bomber that was flown by the United States in World War II and the Korean War. The B-29 remained in service in various roles throughout the 1950s. The British Royal Air Force flew the B-29, named the Washington in RAF service, and the Soviet Union produced an unlicensed copy as the Tupolev Tu-4. The name "Superfortress" was derived from that of its well-known predecessor, the B-17 Flying Fortress. The B-29 was the progenitor of a series of Boeing-built bombers, reconnaissance aircraft, trainers and tankers including the B-29 variant, B-50 Superfortress.

This B-29 was built at the Glenn L. Martin Company's Omaha, Nebraska assembly line in December of 1944. After World War II, she flew with the 301st Bomb Group of the Strategic Air Command. During the Korean War, she flew with the 373rd Weather Reconnaissance Squadron, Kindley Air Base, Bermuda.

In 1956, the B-29 was transferred to the U.S. Navy's Naval Weapons Test Center at China Lake, California. Here she sat out in the desert as a stationary target. In late 1985, the B-29 was dismantled and loaded into a C-5 for the flight to the Travis Museum.

After its arrival at the museum, work began to reassemble the B-29. After the wing was mated to the fuselage, the task of stripping all of the old paint got underway. As the layers of paint were removed, the last layer of paint yielded the nose art - "Miss America '62."

"Miss America '62" was a combat veteran that flew from the island of Tinian during the war with the 6th Bombardment Group, 24th Bombardment Squadron. The original crew members chose to name their bomber "Miss America '62" because all were married and 1962 would be the earliest that one of their daughters could be entered into the famous beauty contest.
Links: www.travisairmuseum.org
1,086 views