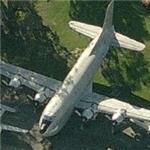 The C-133A (Tail Number 56-1999) was assigned to Travis from February thru November 1960. It is the last Cargo Master in flyable condition and will become a permanent static display at the Travis Air Museum.

N199AB as it was re-dubbed on Dec. 6, 1975 was purchased by Maurice Carlson for the Cargo Master Corporation and was flown to Alaska to haul cargo for the Alaskan Pipeline. Forty-eight years after its departure from Travis, it returned to a base that it called home for the last time.
Links: www.travisairmuseum.org
753 views