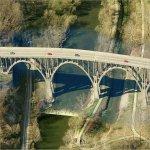 "The five men were 'self-proclaimed anarchists,' who intended to detonate two improvised explosive devices (IEDs) under the bridge in Sagamore Hills."
887 views