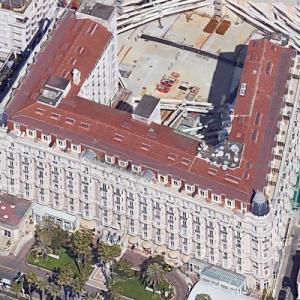 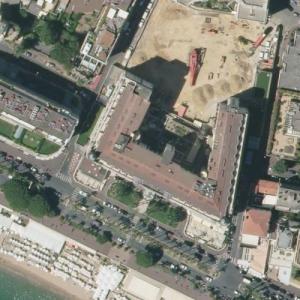 By DonMartini @ 2007-08-17 15:12:49
@ 43.54966, 7.027388
Cannes, France (FR)
The InterContinental Carlton Cannes is a 338-room luxury hotel, built in 1909, located at 58 La Croisette in Cannes on the French Riviera, and listed by the Government of France as a National Historic Building. During the Cannes Film Festival, it is the most prestigious place to stay and the undisputed headquarters of motion picture industry deal-making.

Part of the InterContinental Hotels Group, the Carlton is famous for hosting movie stars from around the world during the annual Film Festival. The hotel was also featured in Elton John's well-known 1983 music video for the single, "I'm Still Standin'", and the exterior and interior features in New Order's 1993 music video for the single, "World (The Price of Love)". More famously, the hotel was a central location for the Alfred Hitchcock film "To Catch a Thief" starring Grace Kelly and Cary Grant.

While staying at the Hotel Carlton during the 1955 Cannes Film Festival, Academy Award winning movie star Grace Kelly had an arranged meeting and photo shoot with His Serene Highness (HSH) Prince Rainier III of Monaco which eventually resulted in their 1956 marriage and in her becoming Her Serene Highness Princess Grace.

The Carlton's distinctive domes on both seaward corners were reputedly designed to resemble the breasts of Caroline Otero, "La Belle Otero" the most famous (or infamous) courtesan of the French Riviera during the years surrounding World War I. The Carlton's elegant seventh floor formal dining room is named La Belle Otero in her "honor," although there are a couple of less formal restaurants, La Côte and La Brasserie, on the ground floor. Only the last-named can be considered the least bit "affordable," with a €49 lobster and champagne menu offered on Fridays only.
Links: www.ihg.com
1,622 views