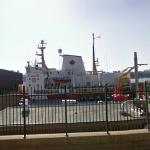 By SpiderX22 @ 2013-06-21 18:46:55
@ 46.807393, -71.203938
Quebec, Canada (CA)
The CCGC Pierre Radisson is an icebreaker of the Canadian Coast Guard. She is designated as a "Medium Gulf Icebreaker. Her winter home port is Quebec City at the mouth of the St Lawrence River in the Gulf of St. Lawrence. She is staffed by a crew of twelve officers and twenty-six sailors. She was built in 1978 by Burrard Dry Dock Company in North Vancouver, British Columbia. Her IMO number is 7510834. The Pierre Radisson participated in Operation Nanook (2009) and Operation Nanook (2008), annual joint training exercises with elements of the Canadian Armed Forces to prepare for sovereignty and disaster patrols.
Links: en.wikipedia.org
442 views