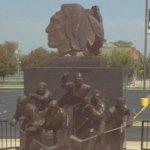 A plaque behind the sculpture reads:
This symbolic sculpture commemorates the 75th anniversary of the Chicago Blackhawk hockey team. The bronze players depict the men who donned the Indian Head sweater and the history and tradition of Blackhawk hockey. Each player represents the pride, the passion, and the emotion of the different eras throughout the storied past of this Original Six team. The names engraved on the monument are of the players who have competed wearing the Indian Head crest as their Badge of Honor.
Links: www.chicagotribune.com
1,803 views