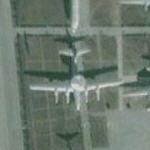 By kjfitz @ 2008-07-31 00:45:47
@ 40.183804, 116.359447
Changping, China (CN)
The KJ-1 AEWC was a first generation Chinese AEW (Airborne Early Warning) radar fitted to a Tupolev Tu-4 bomber. The project was started in 1969 under the code name "Project 926". The prototype aircraft is currently on display at the Chinese Aviation Museum in Beijing. According to the Chinese governmental claim, a single Tu-4 AEW unit was equivalent to more than 40 ground radar stations, but the production was stopped due to the Cultural Revolution. In the era of the Chinese economic reform, the project was once again put on hold because economic development was the top priority. When the project was finally reviewed again for the modernization of the People's Liberation Army Air Force, it was already too late and outdated, instead, China decided to order Israeli IAI Phalcon radar for its A-50I AWACS.
Links: en.wikipedia.org
996 views