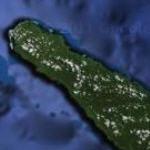 Choiseul was visited by Austrian anthropologist and photographer Hugo Bernatzik in 1932. Bernatzik documented some of the few remaining ancestral customs of the island people which are included in an ethnography that he published a few years later. He also took some photographs of the islanders and brought back a stone urn with carvings, reflecting a culture that he deemed was dying in contact with the modern world.
Links: en.wikipedia.org
467 views