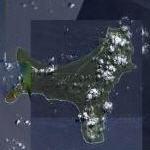 For centuries, Christmas Island's isolation and rugged coasts provided natural barriers to settlement. British and Dutch navigators first included the island on their charts from the early seventeenth century, and Captain William Mynors of the East India Ship Company vessel, the Royal Mary, named the island when he arrived on Christmas Day, 25th December, 1643. He was unable to land, however, and it was not until 1688, when Captain William Dampier on the British ship Cygnet, landed at the Dales (on the West Coast) and two of his crewmen were the first recorded people to set foot on Christmas Island.
Links: www.christmas.net.au
1,523 views