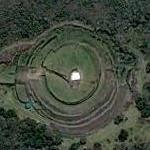 By kjfitz @ 2009-04-28 16:23:50
@ 19.301544, -99.181765
Mexico City, Mexico (MX)
Cuicuilco was an ancient city in the central Mexican highlands, on the southern shore of the Lake Texcoco in the southeastern Valley of Mexico. Today, it is a significant archaeological site that was occupied during the Mesoamerican Middle and Late Formative (ca. 700 B.C. to A.D. 150). Based on its date of occupation, Cuicuilco may be the oldest city in the Valley of Mexico and was roughly contemporary with, and possibly interacting with the Olmec of the Gulf Coast of lowland Veracruz and Tabasco (also known as the Olmec heartland).
Links: en.wikipedia.org
1,568 views