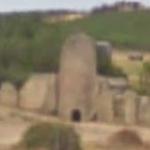 By adrbr @ 2010-05-16 15:09:51
@ 41.050348, 9.357101
Arzachena, Italy (IT)
Giants' grave (Italian: Tomba dei giganti, Sardinian: Tumbas de sos gigantes) is the name given by local people and archaeologists to a type of Sardinian megalithic gallery grave built during the Bronze Age by the Nuragic civilization. They can be found throughout Sardinia, and so far 321 have been discovered.

A stone cairn lies over the burial chamber itself. Some examples have a cup-shaped entrance similar to the Court Cairn tombs of Ireland.

There are two general types of giant's tomb.

In the so-called "slab type", uncut slabs are buried on end in the ground, and are arranged side-by-side. There is usually a central stele, which is the largest (up to 4 m in height) slab and has a doorway cut through it. The sepulchres have a characteristic rectangular plan with an apse. The burial chamber is usually 5 to 15 meters long and 1 to 2 meters high. The structures were originally covered by a mound resembling the shape of an overturned ship. Near the entrance was an obelisk (betile in Sardinian), which symbolizes the gods or ancestors who watched over the dead.