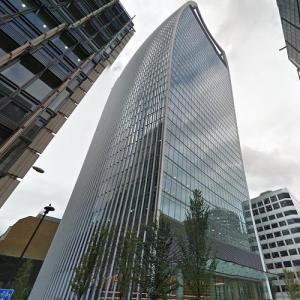 By kjfitz @ 2013-09-03 13:04:42
@ 51.5115892, -0.0830127
City Of London, United Kingdom (GB)
The project became widely publicised during the summer of 2013 when it was reported that the reflection of sunlight off the unusually-shaped building was generating a beam of light up to six times brighter than direct sunlight shining onto the streets below. The reflection reportedly damaged vehicles parked nearby, including one on Eastcheap whose owner was paid £946 by the developers for repairs to melted bodywork, leading the media to dub the building the "Walkie-Scorchie".

For a period of around two hours each day when the sun shines directly onto the building, it acts as a concave mirror and reflects onto the streets below to the south. The beam allegedly ignited the carpet of a barber shop and caused shattering of tiles and melting of paint outside a cafe. In September 2013 a the developers issued a statement saying in part that they were "evaluating longer-term solutions to ensure the issue cannot recur in future."