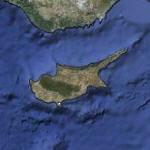 By kjfitz @ 2011-02-04 08:56:52
@ 35.149109, 33.434143
Nicosia, Cyprus (CY)
Cyprus is a Eurasian island country in the Eastern Mediterranean, south of Turkey and west of Syria and Lebanon. It is the third largest island in the Mediterranean Sea and one of its most popular tourist destinations. An advanced, high-income economy with a very high Human Development Index, the Republic of Cyprus was a founding member of the Non-Aligned Movement until it joined the European Union on 1 May 2004.
Links: en.wikipedia.org
3,168 views