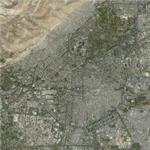 First settled in the 2nd millennium BC, it was chosen as the capital of the Umayyad Caliphate from 661 to 750. After the victory of the Abbasid dynasty, the seat of Islamic power was moved to Baghdad. Damascus saw a political decline throughout the Abbasid era, only to regain significant importance in the Ayyubid and Mamluk periods. During Ottoman rule, the city decayed completely while maintaining a certain cultural prestige. Today, it is the seat of the central government and all of the government ministries.
Links: en.wikipedia.org
904 views