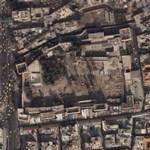 The Roman castrum or military camp was here, and it was probably a stronghold before that. What remains to be seen today dates back to the Ayyubid and Mameluke periods, when Sultan al Adil used this fortification to preserve Damascus against the Crusaders and Mongols in the 13th century. In 1260 however it was destroyed by the first Mongol invasion. It was rebuilt by the Mameluke Sultan Baybars, who made sure that the original 16 towers and walls were rebuilt. However, it was to be heavily knocked down by the second Mongol invasion in 1400 by Tamerlane. The Ottomans did not really pay much attention to it and it was only slightly repaired.
Links: www.syriagate.com
1,260 views