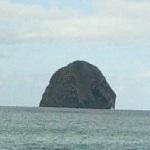 Diamond Rock is also known for its strategic positioning between the St. Lucia Straits. The English and French fought over the rock in the early 1800's. In 1805 Napoleon ordered Admiral Villeneuve to capture the rock. He arrived on May 31 and withstood withering fire until the British on top of the island surrendered due to lack of water.
Links: en.wikipedia.org, virtualglobetrotting.com
466 views