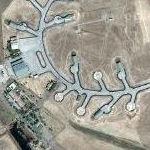 Several AA positions around the perimeter.

Three F-16's on southwest loop and two taxiing off the north end of the runway. A couple other types visible. Slightly blurry imagery.