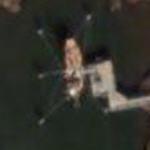 Elizabeth II is framed with treated yellow pine, with planking and decking made of juniper, also called Atlantic white cedar. The original ship would have been made mostly of English oak. While modern power tools and techniques were used in construction, hand tools such as the adze and ax were used in the final framing to give the ship an authentic appearance. The bright colors are similar to those shown in contemporary illustrations of the time.

Elizabeth II was launched on November 22, 1983, and was presented to the State of North Carolina as a Historic Site on July 13, 1984, during the ceremonies to commemorate the 400th anniversary of the arrival of the first English ships to the North Carolina Outer Banks.
Links: www.roanokeisland.com
1,615 views