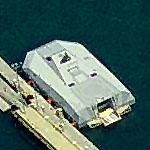 Even though it has a quite shallow draft, the ship is exceptionally stable on rough seas, due to its wide body. This allows the Stiletto to operate both out at sea, and in shallow water. Its unique Double-M hull channels air underneath the hull, lifting it out of the water, thereby reducing friction and increasing speed while maintaining a shallow draft. Additionally, the ship's hull is faceted in order to deflect radar.

One key feature of this boat is that it can set up a network between the boat and a special forces team by launching an unmanned aerial vehicle (UAV) that would relay information between the team and boat. The Stiletto will also carry surveillance UAVs to provide reconnaissance for the SEAL team, and using a clustered supercomputer on board, will be able to send a real-time image to the team on shore.