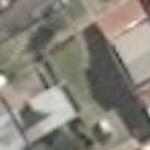 The house is no longer standing, but there are remnants on the lot.
Links: www.flickr.com
12,204 views