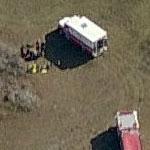 By Times staff writer
© St. Petersburg Times
published May 27, 2002
ZEPHYRHILLS -- Police officials were investigating a fatal skydiving accident Sunday at Skydive City, a large training facility that hosts tens of thousands of jumps every year near the Zephyrhills Municipal Airport.

Investigators did not release details late Sunday, saying only it was an ongoing investigation.

The accident was reported by a 911 call at 5:02 p.m. at 4241 Skydive Lane, according to emergency dispatchers. The person was pronounced dead at the scene.
Links: www.sptimes.com
4,763 views

Pdunn
@ 2009-11-01 06:46:34
I think the progression of events starts with the west view, where the ambulance and a pickup from the skydiving company are first on the scene;t hen switches to the east view where a firetruck and the first police arrive on the scene, the fire chief's truck can be seen turning off the access road; next the south view, where the fire chief truck is seen leaving; and then finally, the north view, where the ambulance and fire crews have left, leaving the police, now with a gold car (probably the coroner) to investigate the accident's aftermath.

If you track back to the quonset hut-like structure at Sky Dive city, you can see a large gathering of people, probably gathering for news of the incident.

Pdunn
@ 2009-11-01 10:50:04
http://www.sptimes.com/2008/01/05/Pasco/Skydiver_tumbles_to_d.shtml
This article shows a photo of the accident aftermath, with an officer on the scene walking past the orange and black striped chute that is visible in the BEV imagery. The pickup truck in the imagery is also in the photo.