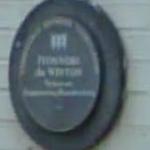 By kkeps @ 2011-09-30 18:55:33
@ 53.137648, -4.272476
Caernarfon, United Kingdom (GB)
Jeffreys Parry De Winton was a marine engineer who came to Caernarfon as a guest of the squire of Glynllifon. The squire persuaded Owen Thomas, a native of Caernarfon and the owner of a very successful foundry on St. Helen’s Road to go into partnership with him in 1854 and the company became known as Thomas & De Winton.

The business flourished and in 1866 Owen Thomas died and De Winton took on his son, also called Owen Thomas as a Junior partner, but from then on the company was called merely De Winton & Co. The company was well known as a supplier of boilers to some of the best known ships of the day that came to Caernarfon to be fitted with new parts, the largest of which was a screw steamer the “Livadia”.