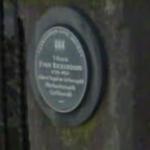 After being inspired by the Methodist preacher Daniel Owen he turned his back on his anglican upbringing and future career in the priesthood. He began preaching himself in 1781.

In 1793 he opened the first Calvinistic Methodist chapel in Caernarfon and was officially ordained as a preacher in 1811.

He opened a number of schools, eventually opening one in Caernarfon for the towns growing Calvinistic Methodists members. He left the school due to ill health in 1817. He died on 29th March 1824 and was buried at Eglwys Llanbeblig .
Links: biography.wales
364 views