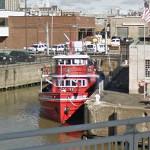 By WacoKidd110 @ 2013-08-02 11:09:08
@ 42.871579, -78.872859
Buffalo, New York (NY), US
Edward M. Cotter is a fireboat in use by the Buffalo Fire Department at Buffalo, New York, United States. Originally named William S. Grattan, she was built in 1900 by the Crescent Shipyard of Elizabeth Port, New Jersey. Due to age she was rebuilt in 1953 and renamed Firefighter upon her return to service. The following year she was renamed Edward M. Cotter. Her namesake, Edward Cotter, was a Buffalo firefighter and leader of the local firefighters union who had recently died.

Edward M. Cotter is considered to be the oldest active fireboat in the world and was designated a National Historic Landmark in 1996.
Links: en.wikipedia.org
453 views