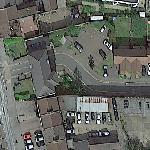 What's left today:
Most of the station has been demolished. A new housing estate is built on the site. A retaining wall of railway orgin does remain and part of the boundaries of the station building survives and is used as the entrance to the estate.
Links: en.wikipedia.org, www.disused-stations.org.uk
422 views