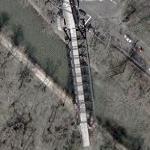 This bridge is a composite, recycled from two older railway bridges and parts from a third, bridges probably built shortly after the Civil War and no longer in use; the current bridge was designed in 1908 and went into service in 1910. Two separate segments are clearly visible. When the trains ran, there was no deck, just ties supporting the rails, scary to walk across. In 1990 Coalition members, with funds for lumber provided by the Rails to Trails Conservancy, put a wooden deck over the rails, creating a surface satisfactory for bicycles. In 1992 the National Park Service contracted with the Federal Highway Administration to rebuild the bridge and install a concrete deck, but it took four more years before the job was satisfactorily completed.