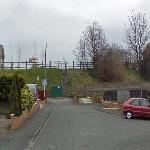 Today nothing remains of the station and a residential area was built on the site in the 1970s. The road bridge that carried Station Road over the rails has now been removed and now the road goes a long an embankment. The road is also still named Station Road.

Note: the steps on the embankment in the thumbnail is where the bridge would've been.
Links: www.disused-stations.org.uk
424 views