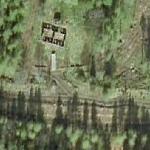 What's left today:
Not much of the station is left today. Only the island platform and one small railway cottage remain. The platform is badly overgrown and the cottage was a ruin for a long time, but has now been made into a private house. Near the junction it is still clear to see where the Callander & Oban Railway seperated from the Killin Railway. The trackbed is walkable and also used by people mountainbiking.

Some small remains of other buildings can also be seen.
Links: en.wikipedia.org, www.railscot.co.uk
408 views