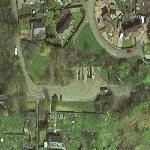 What's left today:
Today nothing of the station the remains, and the old station site has now become a carpark. However, the impressive railway viaduct next to the station still remains today and is known for being an important local landmark, but the bridge has been blocked at both ends so people can not cross or walk on the viaduct.
Links: en.wikipedia.org, canmore.org.uk
657 views