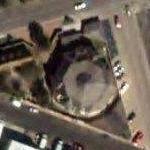 By kjfitz @ 2006-03-12 19:45:35
@ 31.864127, -102.38319
Odessa, Texas (TX), US
Built in the 1960's, the Globe Theatre is a non-profit organization presenting classical and modern plays using an Elizabethan stage. Bringing a bit of British flair to the West Texas landscape is this replica of the original Globe Theatre, the home of William Shakespeare's acting company in England.

The 410-seat octagonal theater was the brainchild of a local teacher and Shakespearean scholar, Mrs. Marjorie Morris, who wanted a proper showcase in which to present the Bard's Plays. The Globe hosts community theater performances, monthly country-western shows called The Brand New Opree, and other community activities. The Anne Hathaway Library next door, a replica of the cottage in which Shakespeare's wife lived, houses displays of special interest to Shakespeare fans.
Links: www.globesw.org
1,171 views