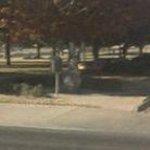 By WacoKidd110 @ 2011-05-31 07:10:50
@ 31.849652, -102.374276
Odessa, Texas (TX), US
The "World's Largest Jack Rabbit" was first pioneered by former Attorney General John Ben Shepperd during his term as Odessa Chamber of Commerce president in 1962. Tom Taylor, who is the former head of the Texas Highway Department Travel and Information Division first initiated the idea of the fiberglass statue. Taylor suggested that the city erect a monument to the jack rabbit, since there were so many in the area. In 1962, Odessa Chamber of Commerce officials, under the leadership of John Ben Shepperd, erected the 8-foot statue on Lincoln Street.

The $2,300 statue was designed by a California plastics firm. The jack rabbit had been the target of many rumors and controversies. At one time an unsuccessful attempt was made by local school children to secure a mate for the "lonely rabbit." In 1970, then Chamber President Dan Hemphill called upon his directors to "correct" the naming of the statue. Hemphill contended that the jack rabbit really wasn't a rabbit at all, but a hare-a prairie hare, to be exact.

In 1997, a rabbit-napping was attempted. Which is now why Jack Ben Rabbit remains bolted to the cement slab on the grounds of the Ector County Independent School District Administration building.

The "World's Largest Jack Rabbit" has become an historical landmark in Odessa. In spite of all the events many people from all over have come and continue to visit Odessa to see what the rabbit is all about.
Links: www.texasescapes.com
530 views