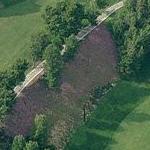 The 65-year-old man teed off with three friends on the second hole of the Pala Mesa Resort Golf Course about 50 miles north of San Diego at around 10 a.m. and then got into his cart.

The vehicle veered off the concrete pathway, traveled down a 25-foot embankment and went over the edge of the cliff, California Highway Patrol spokesman Tom Kerns said.

The victim, a recently retired real estate agent from Irvine, was ejected shortly before the cart hit the road beneath the cliff and died on impact, Kerns said. His name was not immediately released.

No one else was involved in the crash.

Investigators will inspect the golf cart for mechanical failures, Kerns said. Drugs or alcohol were not thought to have been factors in the crash.
Links: news.yahoo.com
16,793 views