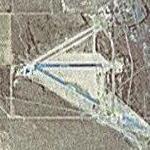 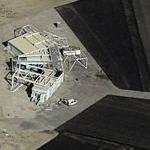 By kjfitz @ 2005-07-31 17:00:15
@ 34.565194, -117.680662
Palmdale, California (CA), US
Gray Butte was the first of the three secret radar cross-section test facilities built in the Antelope Valley (Lockheed Martin operates a facility near Helendale, and Northrop Grumman has one at the Tejon Ranch property). It was originally built in the 1970's by McDonnell Douglas, and was taken over by Boeing (which bought McDonnell Douglas), and then closed by 1999, and put up for sale. These RCS ranges are used to test aeroforms (shapes to be incorporated into aerodynamic vehicles) for their radar reflectivity. At one end of the range is an array of radio and radar dishes used to measure the profile of the shape, which is mounted several hundred yards or so down the range on a triangular pedestal. The large box structure, visible from miles away, is a movable gantry, used to install the aeroforms on top of the test pylons, which are visible as white triangular forms on the runway area. In 2000, the property was acquired by the Aeronautical Systems division of San Diego-based General Atomics, which developed the Predator and Gnat UAVs. The company owns the El Mirage airport a few miles north, to test UAVs. Gray Butte now supports UAV R&D
Links: clui.org
3,828 views

Which is exactly what General Atomics desires.

Thanks for making the effort.

Anonymous
@ 2010-06-19 14:57:33
I lived in this area before it was owned by GA. That was when the "Behemoth" was there, it was quite startling to see. They had very heavy security! I was chased by men in white trucks that just came up out of the ground it seemed. Later friend told me she had seen what looked like some sort of bunker leading underground, that the trucks would come out of. all very interesting.