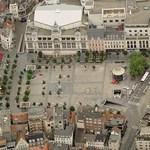 By DonMartini @ 2007-03-31 04:37:49
@ 51.219264, 4.401884
Antwerp, Belgium (BE)
The Groenplaats or 'Green Place', one of Antwerp's most prominent squares is located right in the heart of the city's historic district. Not as green as its name suggests, the Groenplaats is a square bordered mainly by cafés. The café terraces are very popular with both tourists and locals and are a great place to try some of the many specialty beers.

Until the 18th century, the Groenplaats was Antwerp's central cemetery. During the Austrian occupation, emperor Joseph II abolished cemeteries inside the city walls, so it was converted into a square. In 1843 a large crucifix in the middle of the square was replaced by a statue of Antwerp's famous painter P.P. Rubens.

The square has seen some improvement over the years, with the construction of an underground parking and the destruction of an ugly parking building which was replaced by a postmodern building. The most interesting building on the square is the exemplary renovated 1920 Grand Bazar, now a Hilton Hotel.

The square offers a great view on the city's Cathedral, which is just north of the Groenplaats. It is also the starting place of a tourist tram, which offers a ride along some of Antwerp's most interesting sights.
Links: www.aviewoncities.com
949 views