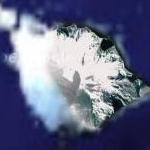 Heard is an active stratovolcano in the south Indian Ocean. Heard has erupted at least eight times since 1910. All known eruptions are from a vent called Mawson Peak, named for Australia's famous Antarctic explorer. Many of the eruptions are subglacial. Most eruptions are moderate in size (VEI=2) and explosive. Only three historic eruptions have produced lava flows. The most recent eruption of Heard was in 1993.
Links: volcano.und.edu, en.wikipedia.org
1,431 views